Although just commonly referred to as Fender, the full name of the company is actually Fender Musical Instruments Corporation – or FMIC.

Fender are an American company most known for manufacturing stringed instruments and amps.

They are perhaps most famous for producing quality solid-body electric guitars (particularly the Stratocaster and Telecaster models) and bass guitars (notably the Precision and Jazz bass models).

History of the brand

Fender began life in 1938 in California and was founded by Leo Fender – an electronics technician who made his living repairing radios and amps.

During his work Leo noticed a lot of design flaws in amplifiers and, in his spare time, started to design and build his own versions.

Within a few years he began to manufacture and sell his own electric instruments and amplifiers – starting in 1945 with a steel lap guitars. This led Fender to the realisation that manufacturing was a much more profitable business model than repairs, so he focused on that side of the business completely.

After that decision Fender never looked back and, thanks to partnering with marketing guru Don Randall, the company went from strength to strength designing, manufacturing and selling electric guitars to a new generation of music fans.

Don Randall was credited with creating the innovative and hugely successful ‘You won’t part with yours either” ad campaign for Fender’s line of guitars: 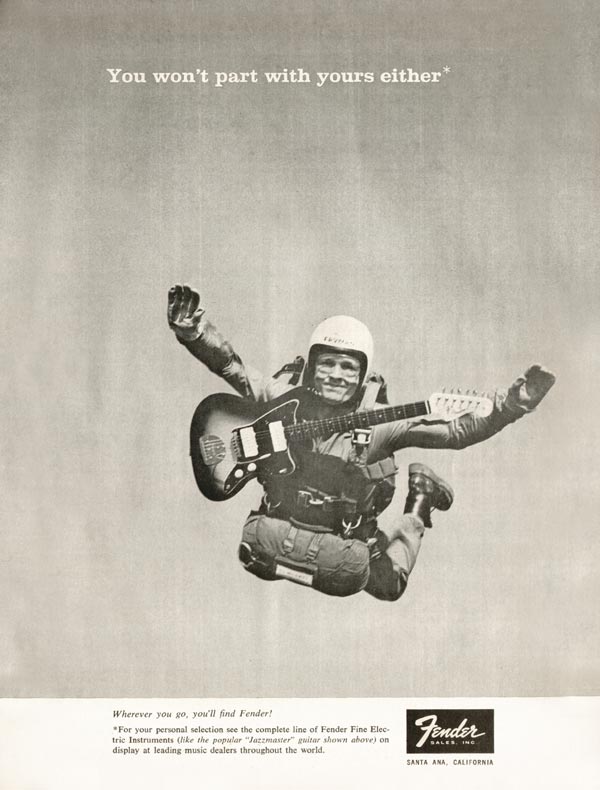 After almost 20 years of success Leo Fender sold his manufacturing business to Columbia Broadcasting System (CBS) for a reported $13 million.

After the deal, Fender guitars changed hugely – some say not for the better. Quality was said to suffer due to CBS’s cost-cutting measures, while the design of the guitars changed.

Fender was sold by CBS in 1985 and was renamed the Fender Musical Instruments Corporation.

Since then it has reclaimed its name as an iconic guitar brand and has branched out into other areas, including acoustic guitars. It has also entered into an agreement with Gretsch guitars and owns other well-known brands including Jackson, Olympia and Squier.

Types of guitars by Fender

The legendary Stratocaster, or ‘strat’, was first designed in 1954 and has gone on to be one of the most successful – and most imitated – electric guitars in the world.

The Telecaster, or ‘Tele’, has the distinction of being the first commercial solid-body single cutaway electric guitar. The Tele began life back in 1950 and was originally called the Fender Broadcaster.

The Starcaster was Fender’s first foray into producing semi-hollowbody electric guitars, but failed to capture the market’s imagination and production was originally cancelled. However, it made a comeback in 2013 when Fender reissued the guitar as part of their ‘Modern Player’ series of releases.

The Esquire was the first ‘Spanish style’ guitar manufactured by Fender, and was first produced in 1950.

Several country musicians used the Esquire and helped drive its popularity, as well create one of the most notable ‘sounds’ in American music – the ‘Boom Chicka Boom Sound’ that characterised the work of Johnny Cash.

The Jaguar guitar was first created by Fender in 1962 and was made jam-packed full of new features in an attempt to lure guitar players away from buying Gibson-made instruments.

The Mustang was first produced in 1965 and heralded Fender’s revamp of their ‘student’ line of guitars. Production of the Mustang was discontinued in 1982, but it made a return in 1990 thanks to the emerging punk and grunge musicians.

The Fender Jag-Stang was another guitar designed by Kurt Cobain, who merged the features of the Fender Jaguar and Mustang guitars into one guitar. Cobain famously played his Jag-Stang guitar throughout Nirvana’s 1994 US tour in support of their In Utero album.

The ‘P-Bass’ was designed by Leo Fender in 1950 and was sold from 1951. It is widely regarded as the first electric bass guitar to really gain traction in the market, and has had a massive impact on music ever since.

Following hot on the heels of the Precision Bass, the Jazz Bass (or ‘J Bass’) was Fender’s second electric bass guitar and featured a richer mid-range and treble – making it more popular with bassists who wanted to be more prominent in the mix.

The Jazz Bass has been credited with having an influence on the development of several musical genres, including disco, funk, reggae and jazz fusion.

Like it’s electric guitar namesake, the Jaguar Bass is a feature-rich and premium bass guitar by Fender.

It was introduced in 1960 and had a similar revival in the 90’s as the Jaguar electric guitar thanks to the patronage of indie rock musicians.