How to play the guitar

Before you become a bona fide guitar legend, you need to learn the basics of the guitar.

First of all, if you’re a bit unsure about all the different types of guitar and what they do/how they work then read our guides here:

Now that’s sorted, let’s get started with some of the basics of playing the guitar…

Identifying the parts of the guitar

Obviously, if you’re going to be playing guitar you need to be familiar with the different elements that make up a guitar.

Whether it’s an electric guitar or an acoustic guitar, what you have in your hand is basically a lump of wood and metal – although a lump you can manipulate to make awesome sounds with!

That sound comes from the guitar strings vibrating when you strum/pick them. With an acoustic guitar, the wooden body resonates the sound created by the string vibrations to create those warm sounds.

With an electric guitar, the string vibration creates a signal by generating a small electric current in the magnetic pickups. This signal is then passed through the tone and volume circuits to the output jack, and then through a cable to an amplifier.

Headstock – This is the bit at the top of the guitar where the strings end (or start, depending on your point of view) and are attached to the tuning pegs (also called machine heads). Here they can be tightened or slackened by turning the pegs.

Bridge – The other end of the strings are attached to the bridge, which is close to the pickups on an electric guitar, and the sound hole on an acoustic where the sound vibrates into. On an acoustic guitar the strings are usually attached to the bridge via little pegs, whereas on an electric guitar they are strung through little eyelets.

How to hold a guitar correctly

We’re guessing you may have worked most of this out yourself, but it’s worth just running through the best practices to make sure you don’t start off on the wrong foot.

If you’re right-handed, then you’ll be strumming the strings with your right hand and using your left hand to press the strings against the fretboard. If you’re left-handed, then that is all reversed (we’re sure you’re used to that by now!)

When playing the guitar, sit up straight and hold the back of the guitar so it is touching your stomach and chest and resting on the leg of your strumming hand. This may feel a little awkward and unnatural at first, but trust us, it will soon be as familiar and comfortable as sitting with a laptop on your lap.

Most of the weight of the guitar should be held by your leg and by cradling it with your upper body – leaving your fretting hand free to just stabilise it and add pressure to the strings.

You should be holding the neck of the guitar between your thumb and forefinger, so your thumb is up against the back of the neck and your four fingers at the front ready to press the strings down.

Tuning guitars can be a bit difficult for beginners, so difficult in fact that many guitar players simply never learn how to do it properly.

While learning the basics and starting off playing a few songs, it’s not really necessary to commit a lot of time into learning to tune it as for now you can use a guitar tuner.

When you become a bit more proficient at strumming and playing chords, it’s definitely worth then learning how to tune.

For now, what you need to know is the order of each of the strings and what note they play. When looking at the neck of the guitar, the strings should be ordered with the thickest at the top and the thinnest at the bottom.

If you’re thinking about learning to play the guitar, you will have probably heard the word ‘chord’ already. But what exactly is a guitar chord? A chord is a harmonic group made up of at least three notes being played at the same time.

When learning to play guitar there are two basic types of guitar chord you need to be focusing on: first position chords and barre chords.

What are first position chords?

These are chords that can be played using a combination of open strings and pressed strings, all within the first three frets of the guitar.

What are barre chords?

Also referred to as ‘bar chords’, this is a type of guitar chord that is played by using one (or sometimes more) finger to press down multiple strings at a time on the same fret (think of your finger as a bar pressing down all the strings).

Now you’re a bit more familiar with the terminology around the different types of chords, it’s time to start actually playing them.

To start, you should be trying to master the standard Major chords: C Major, A Major, E Major, D Major, G Major, and the standard Minor chords: E Minor, D Minor and A Minor.

See below for instructions on how to play each one, and don’t worry if it feels weird and a bit unnatural at first – we all have to go through that stage.

Here’s the chord diagrams, plus a few others for you to practice: 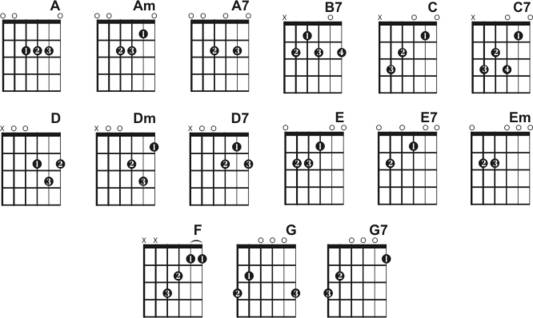 This bit can get very frustrating, and you may even hurt the tips of your fingers as you press the strings. But you know what they say: no pain, no gain! Each and every one of the guitarists you look up to and admire has gone through this frustrating, painful part of learning to play – so grit your teeth and keep going.

When practicing the chords, play each string individually so you can feel where the problems are and which strings require extra pressure. To get a clean sound each string that needs to be pressed down should be pressed all the way to the fret board.

As well as not pressing down hard enough, another common problem when learning to play chords is that your other fingers can get in the way and ‘block’ the strings, producing a dull or muffled sound. If this is happening you need to practice getting your fingers in place so that they can press down the string without touching any other strings. It’s not easy at first, so you will need to be patient and persevere with it.

How to read guitar tabs

Guitar tab (or ‘tablature’) as it is sometimes referred to, is an easy method of writing down music to be played on the guitar without actually having to learn how to read music. So instead of the symbols used in musical notation, tabs are made up of ordinary numbers and characters.

Using tablature is therefore probably the easiest way to start playing solos and riffs on the guitar without reading music.

To read tablature, you first of all need to familiarise yourself with this:

As you have probably already worked out, that is a representation of a guitar fretboard, with the letters on the left representing the strings (as if you were looking down at it while your guitar is in your lap).

So far so easy. Now try this on for size:

So that is a simple melody line to play, how about reading chords that represented in tab form?

As the numbers are in a vertical line, that means you play each pressed down string at the same time. The first and second chords on the above is an E major. Then an A major (with the D, G and B strings all pressed down on the second fret). Then two D majors.

Told you it was easy!

Now you’re familiar with the basics of tabs, it’s time to take a look at the different symbols you may encounter out in the wild.

As you can see, these are all pretty self-explanatory. Let’s try a quick example:

Rather than go through all the different symbols here, if you need any more help there’s a great guide here: https://www.ultimate-guitar.com/lessons/for_beginners/guide_to_tab_notation.html

When you’ve some of the basic chords and tabs down, you can move on to impressing your friends by whipping out the guitar and playing a song.

With Or Without You – U2